Swiss meringue buttercream. Do it. You will not regret it.

I wanted to experiment with Swiss meringue buttercream and figured I would do so by making a Mother’s Day cake. For my sponge layers, I used this recipe and failed miserably. Luckily, the buttercream came thru.

For my buttercream, I whisked 4 egg whites and 1 cup of sugar over a double boiler. As soon as the mixture reached 160°F, I began whipping until the egg whites were white and glossy. Then, I added a splash of vanilla. I added 3 entire sticks of softened butter (this cake will give you a  heart attack) little by little. At one point, the icing became soupy, but based on my extensive research, that’s supposed to happen. I let the KitchenAid whip the icing for a good 10 minutes until the soupy mixture pulled itself together into one cohesive icing. The end product is 100% smoother, lighter, and less sickeningly sweet than American buttercream is. It’s like eating a cloud.

I free-handed the filling by cooking a pint of fresh raspberries, a stick of butter, 5 egg yolks, and a few scoops of sugar on the stove. After the curd thickened, I forced it through a sieve to separate out the raspberry seeds. 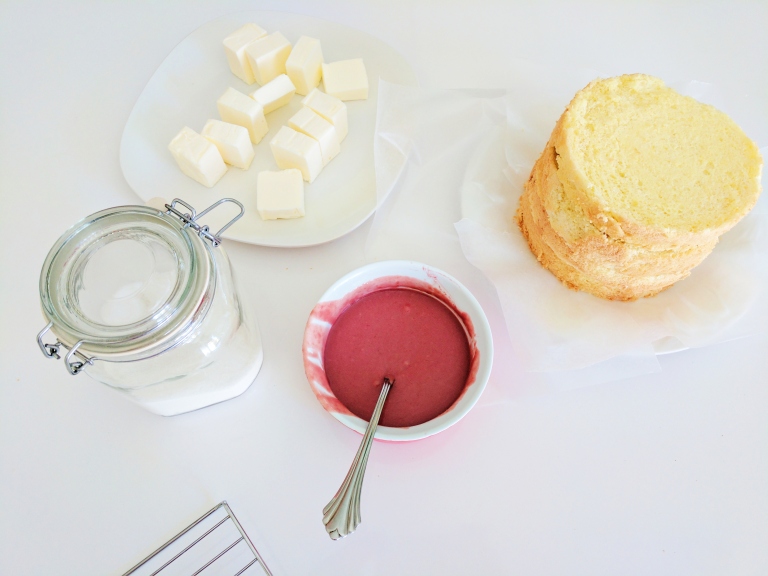 After hours of baking, mixing, stacking, and icing, I took the easy way out of cake decorating by topping the cake with fresh flowers and greenery.