This morning’s fog put me in a cooking mood. Plus, I wanted to play with my Google Pixel’s camera. So, I went to Nugget Markets and thought to myself, “What’s the most pretentious food I can possibly make?” Gnocchi and brown butter. I’m not a picky eater by any means, but gnocchi is definitely not my favorite food. Something about the taste and texture of gnocchi always makes me feel like I’m eating baby food curds. Also, brown butter is literally overcooked butter, but all the food snobs seem to love it?? 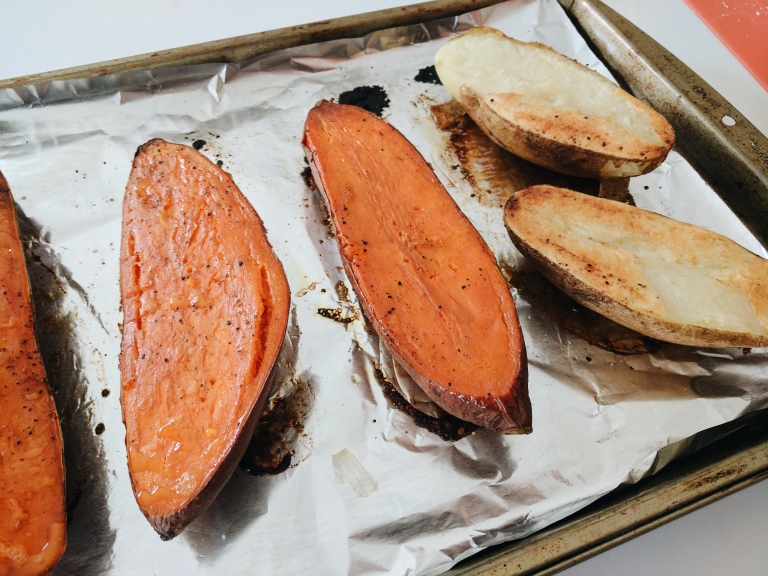 I picked up a few sweet potatoes, Russet potatoes, and a wedge of Parmigiano-Reggiano – that’s Giada for “parmesan”. I roasted the potato halves with olive oil, salt, and pepper at 425 °F for about 40 minutes.

For further prep I grated about half a cup of parmesan, and shaved off a few extra shreds for garnish. I also picked some fresh sage leaves from the backyard. 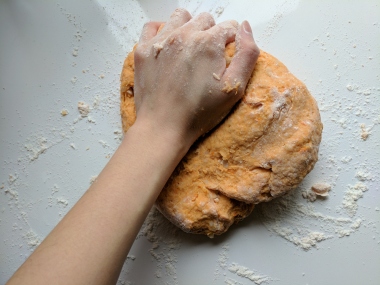 To form the dough, I scooped about two cups worth of the potato flesh and used a fork to lightly fluff it until combined, being careful not to over-mix. Then I mixed in an egg and the grated parmesan. I slowly added in about two cups of flour until the dough formed a slightly elastic ball. 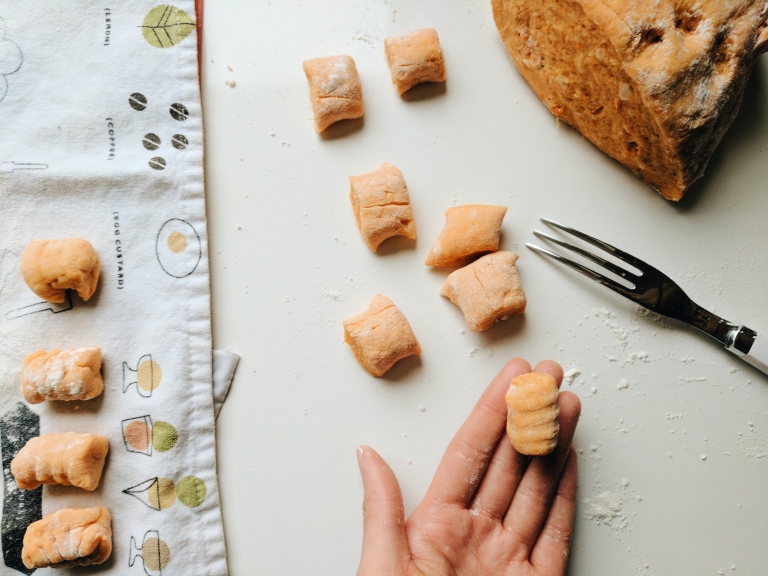 Using a bench knife, I separated the dough into workable sections and rolled the sections into long ropes about three quarters of an inch wide. After cutting the ropes into tiny nuggets, I rolled the pieces along the tines of a fork to form the trademark gnocchi ridges. 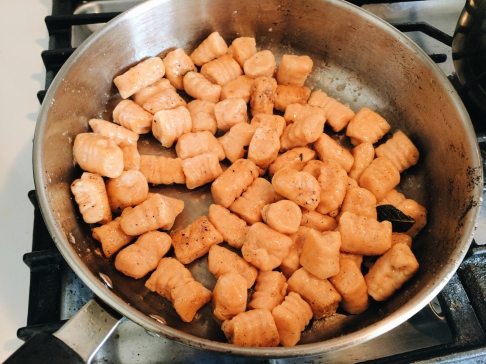 I cooked the gnocchi in batches by boiling them in water until they floated to the top. For the brown butter sage sauce, I melted half a stick of butter on medium-high heat. Once it began to froth, I tossed in the sage leaves and let them fry for less then a minute. I then drained them on a napkin and they ended up perfectly crispy. The sauce is done when the milk solids are brown. As you can see, mine turned out to be black butter. I tossed the gnocchi in the butter, sprinkled in some salt and pepper, and waited for them to sear until slightly crisp on the outside. After removing the pan from the heat, I drizzled on some white wine vinegar to cut through the greasiness.

When plated and garnished, the finished product was not bad! I think food snobs would be proud.